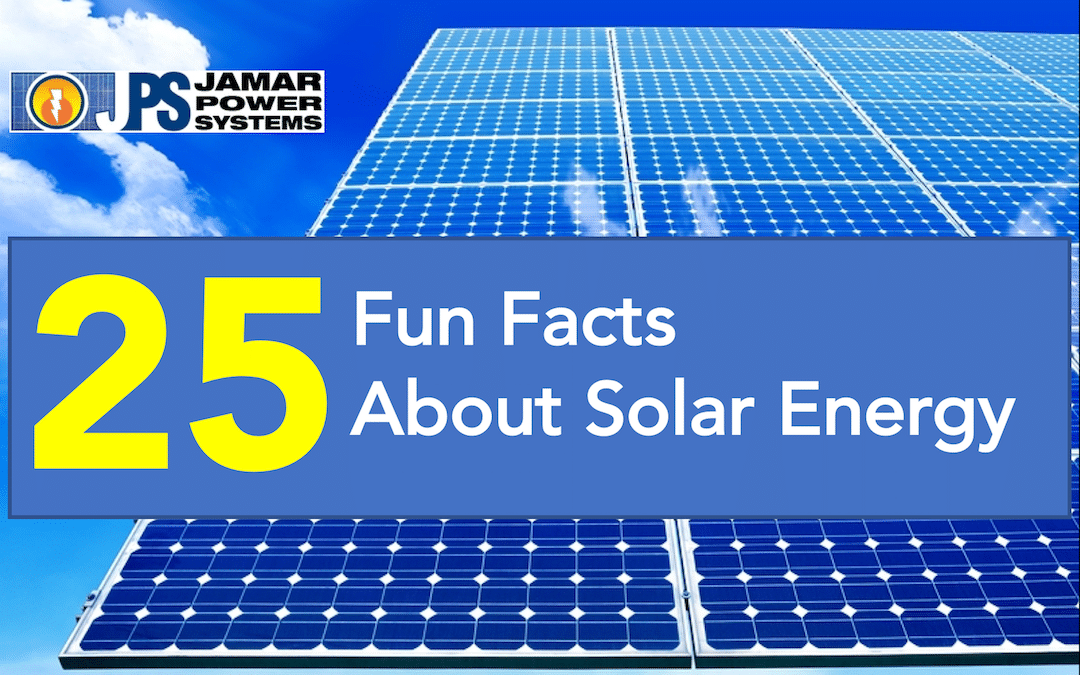 25 Fun Facts About Solar Energy for Your Home

What Solar Energy is Used For?

2. Solar lighting has become a common landscaping feature for many homes. The small lanterns are staked into the ground, lining driveways or walkways. They collect and store solar energy during the day to light themselves during the night.

3. Solar energy can also be used for solar chimneys, which are passive cooling, heating, and ventilation systems. They are typically inexpensive and highly efficient.

4. Solar energy powers portable devices such as radios, phone-chargers, and calculators. Solar-powered calculators have been popular since the 1970s.

5. Solar backpacks can charge mobile devices while hiking. Many solar packs are available for less than $100.

6. Landscaping lights or holiday lights can also be solar-powered and eliminate the tripping hazard of using extension cords.

7. Solar-powered fountains and birdbaths can be another great way to eliminate extension cord tripping hazards while still enjoying your lawn decorations.

8. Solar energy has proven to provide lower costs for removing salt from seawater to produce safe and clean drinking water for cities and towns.

9. Going solar can free you from a lifetime of dependency on the electric and gas utility companies. Once your solar power system is paid off, it provides you free electricity. Instead of paying the utility company forever to power your home or heat your pool, sunlight can do the job and potentially save your household substantial amounts of money.

10. It takes an average of eight years to pay off a solar panel installation and as little as two years to return your total investment in sunnier climates and areas with government incentive programs.

11. Solar energy is a clean, renewable source of energy. There is no pollution from using a solar energy system. Solar panels are also silent, so there is no noise pollution either. Solar panels save C02 emissions from being burned, and a by-product of that is cleaner air and improved community health.

12. Solar energy is the most abundant energy source. The entire human race’s power needs could be met with the solar energy that hits the Earth in just one hour. The sun may be 90 million miles from the Earth, but the photons emitted from the sun’s surface has an ETA of less than ten minutes.

13. Solar panels are virtually maintenance-free. Many come with both 25-year product and power warranties. Solar panels have been known to last 30 to 40 years without any upkeep, aside from washing them clean of dirt and dust with a garden hose a few times a year.

14. Batteries can be used with a solar electric system to store excess power throughout the day so that there is plenty of power available at night and on cloudy days.

15. Solar electric power costs less than utility company electricity throughout most of the United States.

16. Solar energy has created jobs. Over 240,000 Americans are employed with the solar power industry..

17. Clouds still release a fair amount of sunlight so that an overcast day won’t mean a drastic loss in energy for your system. In contrast, shade from trees, chimneys, roofs, poles, and other objects that block the sun’s light will result in energy losses for your system.

18. You don’t have to purchase your solar panels outright. You can finance them for purchase, lease them, or pay only for the electricity they produce (PPA). For more info see our Complete Guide to a Solar lease, PPA, and Purchase.

19. In many states, solar panels are exempt from property taxes despite the value they add to a residence.

21. Solar energy systems can monetize themselves in the form of “Solar Renewable Energy Certificates,” or SERCs. Many states require that a certain amount of energy from utility companies comes from renewable resources. To meet these quotas, utility companies will buy SERCs from homeowners and claim they are responsible for the energy produced. Every SERC is worth 1000 kWhs.

22. The federal government offers a Solar Energy Investment Tax Credit (ITC) equal to 22% of the total installed cost if installed by Dec. 31, 2021. The tax credit goes to ZERO for residential after 12/31/2021.

Other Interesting Facts About Solar Energy

23. Leonardo da Vinci was the first to predict that sunlight could be harnessed as an energy source in the 15th century. The first-ever solar cell was developed by American inventor Charles Fritts (1850-1903) in the year 1883. It was made of selenium, and it operated at around 1% solar efficiency. The first silicon solar cell was developed in 1954 by Bell Laboratories, and it has widely been considered the predecessor of all modern solar devices.

24. America is currently the third-ranking solar market in the world, and we could quite possibly climb to the second. The demand for solar energy in the United States is higher than ever, and it is continuously growing. The Mojave Desert in California houses the world’s largest operating solar thermal energy plant: Ivanpah Solar Power Facility. The plant has been live since 2014 and has a maximum capacity of 392 megawatts.

25. Swiss pilot Bertrand Piccard demonstrated the potential of solar-powered aircraft by flying a solar-powered plane around the world with no additional fuel or power source. He started early in 2016 from Abu Dhabi in an airplane named Solar Impulse II and made his safe return in July.

Thinking about solar energy for your home? Use our free solar calculator to see how many solar panels your home needs and what the estimated costs and payments would be.

Want to know more abou leasing versus buying? See our “Complete Guide to a solar PPA, lease, and purchase.“ Follow us
Latest posts by Phil Edwards (see all)